Since September, high school students in Rochester, N.Y., and Hillsborough County, Fla., have been taking a joint digital course on civil rights.

This week, the course kicked into high gear, when a civil rights museum on wheels left New York state for Tampa, Fla., as part of a "Destination Diversity" tour, with plans to stop at locations along the way with ties to the civil rights movement.

On Wednesday, the traveling museum—a restored 1954 GMC TDH transit bus in the green, yellow, and white color scheme of Montgomery, Ala., buses from that era—stopped near the Martin Luther King Jr. Memorial in Washington.

There, staffers from the Department of Education's civil rights division boarded the bus to discuss with students in Rochester and Hillsborough County, Fla., who were participating via a large video screen mounted on the bus, the department's work around transgender students, testing, suspensions, and civil rights in the education realm.

The traveling museum will continue its journey south over the next several days, making stops at the International Civil Rights Center and Museum in Greensboro, N.C., the Martin Luther King, Jr. Center for Nonviolent Social Change in Atlanta; and, finally, Thomas Jefferson High School in Tampa.  At each location, students in Rochester and Hillsborough will hear from individuals affiliated with the civil rights movement, and residents in those areas will be able to board the bus, follow a timeline of the movement, hear an oral history of the movement, and, in some cases, talk to students. 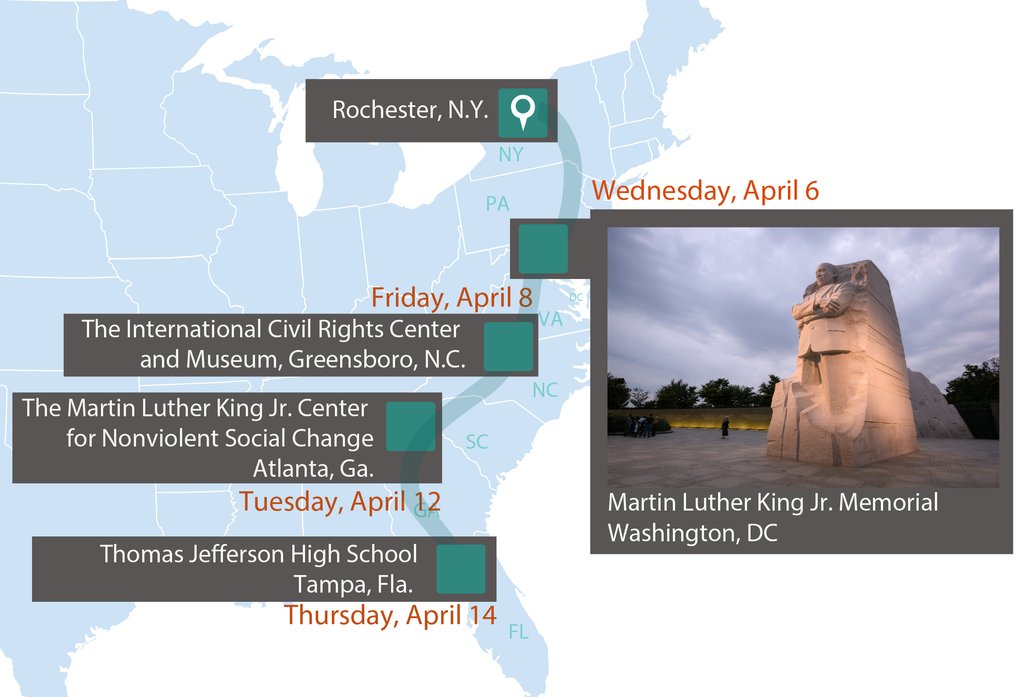 The year-long civil rights class grew out of an experiment that the Council of Urban Boards of Education and the Rochester school district conducted in January last year around the Rev. Martin Luther King, Jr.'s  birthday.  Backed by technical assistance from Cisco, students from eight districts across the country gathered for a live digital town hall to discuss King's famous "I Have a Dream" speech and its resonance in today's world.

With the town hall's success, the district started exploring ways to take advantage of the technology it had at its disposal.

Gilbert Rosa, a social studies teacher at Rochester's School Without Walls, an alternative school, said he didn't quite know what to expect when the digital class was pitched to him last summer.

He had never met his co-teacher, Ivy Shipp-Washington, who teaches in the Hillsborough County district, but he saw the opportunity for his students' learning and experiences to extend beyond the walls of his classroom, as the school's name suggests.

The two teachers worked together to devise a curriculum for the course. The first time the teachers met  "face-to-face" was on a video conference call, he said. About twice a week, a dozen or so 9th to 12th grade students sit on the Rochester side of the camera for the civil rights class, while about 30 students do the same hundreds of miles away in Florida.

Through the class, students explore contemporary civil rights issues and make historical connections. The class, for example, recently dissected the case of Glenn Ford, a Louisiana man who spent nearly 30 years on death row for a crime he did not commit and succumbed to cancer last year shortly after he was released from prison, Rosa said. The class examined Ford's case along with that of the 1931 Scottsboro Boys, in which nine African-American teenage boys were falsely accused of raping two white women.

The Destination Diversity tour is a great addition to the course and the examination of civil rights, Rosa said, because "the kids don't have to leave the classroom to take part in this field trip."

"At School Without Walls, we have always talked about education taking on many different forms," he said. "I think this is proof that learning can take place anywhere, even if the teacher is not there in the room...This is a good example. We are going to people [and] talking to them—I think that's what education is about. You want to create a scenario where kids are excited to show up every day because there is something new and exciting for them."

While the students are not on the bus, they will be connected through modern technology, Van Henri White, the president of the Rochester School Board, said in an interview last week. The class sessions and conversations with speakers at various stops will also be streamed online and archived for viewing between the stops.

"Literally, it will be a digital room full of people," White said.  "What you have is a wonderful blend of technology—next-generation technology—and history, allowing kids to talk about history."

White owns the bus and has spent thousands of dollars restoring it to look like the one Rosa Parks boarded on Dec. 1, 1955, when she refused to give up her seat.

Setting up the mobile museum with Van White in DC #destinationdiversity pic.twitter.com/BMilzjmOQT

For White, the digital class is an opportunity to bring together students from different backgrounds and experiences, and the civil rights museum on wheels is a form of expeditionary learning.

Not all of the Rochester students would have the chance to visit the Martin Luther King Jr. Memorial, visit Greensboro (where African-American college students sat down at Woolworth's whites-only lunch counter and started the sit-in movement) or make it to Tampa to interact face-to-face with their classmates. Students in Tampa will also get explore the museum on wheels.

White envisions future digital classes involving students from vastly different backgrounds and walks of life, including potentially pairing students in urban and rural settings or even suburban and urban settings. The subjects could extend far beyond civil rights, he said.

"Imagine the potential to expand AP classes to districts that are too poor to afford the extra teacher or two [to] provide AP instruction," he said.

"This journey is a physical journey," White said of the current trip, "but what we are trying to do is inaugurate for the nation a conversation about the use of next-generation technology."

Such experiences could finally lead to the kinds of integrated classrooms that courts, politicians, and well-intentioned public officials have sought unsuccessfully over the years, he said, "which is to provide an environment where kids can learn together, in an environment that is not intimidating or unsettling," he said.  "The internet, the digital classroom can do that."

(While the inside of the bus has been outfitted with modern technology, it still only goes about 35 miles an hour. As a result, it can't be driven on the interstate and will be ferried on a flatbed truck between stops.)

The Destination Diversity tour plans to roll into Greensboro on Friday, April 8. Follow the bus at  //www.rcsdk12.org/Page/45963 or on Twitter using the hashtag #DestinationDiversity.