How important is it that children attend a racially and ethnically mixed school, even if it's not in their local neighborhood?

In a recent national survey by the Pew Research Center, 68 percent of black respondents said that attending a school with a diverse population is important, even if it means that children don't attend school in their local community.

Whites, however, placed a much higher value on neighborhood schools: 62 percent said that children should attend schools close to home, even if that meant that the schools would have a less diverse group of students.

Asian and Hispanic respondents were evenly split on the importance of attending a racially and ethnically mixed school, compared to a school that is in a child's local community.

The findings released Wednesday were part of an expansive survey that measured the challenges and advantages of a diversifying society. Respondents also answered questions on how much they valued racial and ethnic diversity in the workplace and in their neighborhoods, and whether they saw diversity as having a positive or negative impact on the country overall. 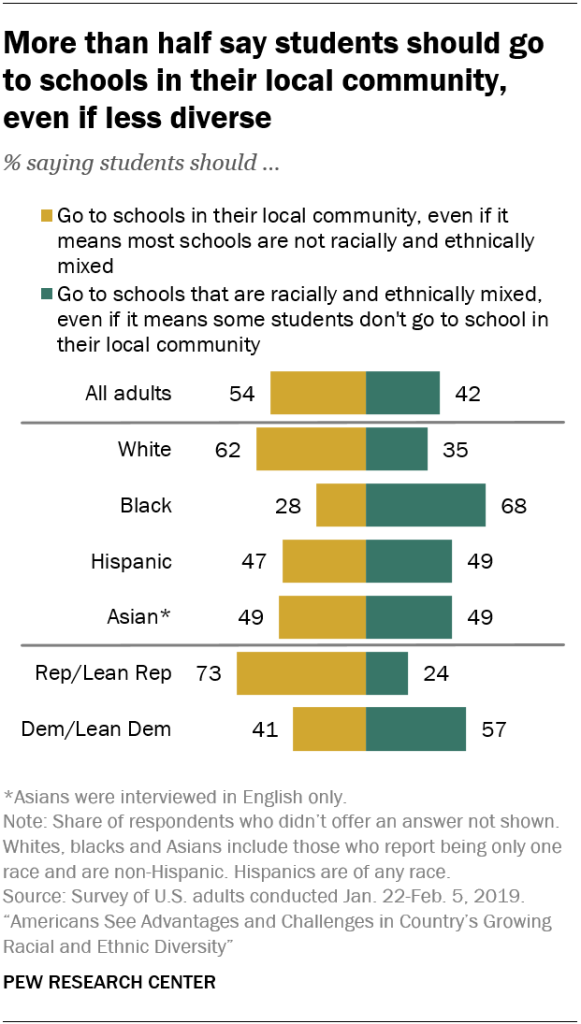 The question also produced a sharp split among political lines, with 73 percent of Republicans, compared to 41 percent of Democrats, saying that children should attend school in their local communities.

But even among Democrats, the racial differences were apparent.  Seventy-one percent of black Democrats said that children should attend racially and ethnically diverse schools, even if they are not in a child's own community. That compares to 52 percent of white Democrats, 56 percent of Hispanic Democrats, and 55 percent of Asian Democrats saying that racial and ethnic diversity was more important than neighborhood schools.

Maria Krysan, a professor of sociology at the University of Illinois at Chicago, and an expert in residential segregation, said the response reflects other research that has been done on the importance that different racial groups place on diversity. Black people are "to a greater extent interested in racially diverse settings for their kids, relative to whites," said Krysan, the co-author of Cycle of Segregation, on the persistence of racial stratification in neighborhoods. "White people certainly have, to this point, lagged behind African Americans in that interest in diversity," she said.

One reason may be that when white people think of their neighborhood schools, they may envision schools that are generally better-resourced than those in predominantly black neighborhoods, she said. "Valuing [neighborhood schools over diverse schools] is all relative for this perspective," she said.