« To Excuse or Not to Excuse? How Districts Are Handling the Climate Strike | Main | After That Viral SRO Story, What Districts Should Know About Police Conduct in Schools »

Principals, You Are the Most Trusted Professionals

Congratulations, principals. Americans trust you. They trust you more than police, more than military leaders, and not surprisingly, more than journalists and members of Congress.

In fact, principals, the American public gives you high marks for being honest with information and how you handle public resources, according to a new Pew Research Center survey.

Maybe it's time to ask for that raise. Here's a closer look at how the public views you.

The questions were part of a Pew Research Center project on how Americans view select groups that hold vast power and responsibilities. Pew sought to capture how Americans view these power brokers' job performance, empathy, ethical behavior, and willingness to own up to mistakes. 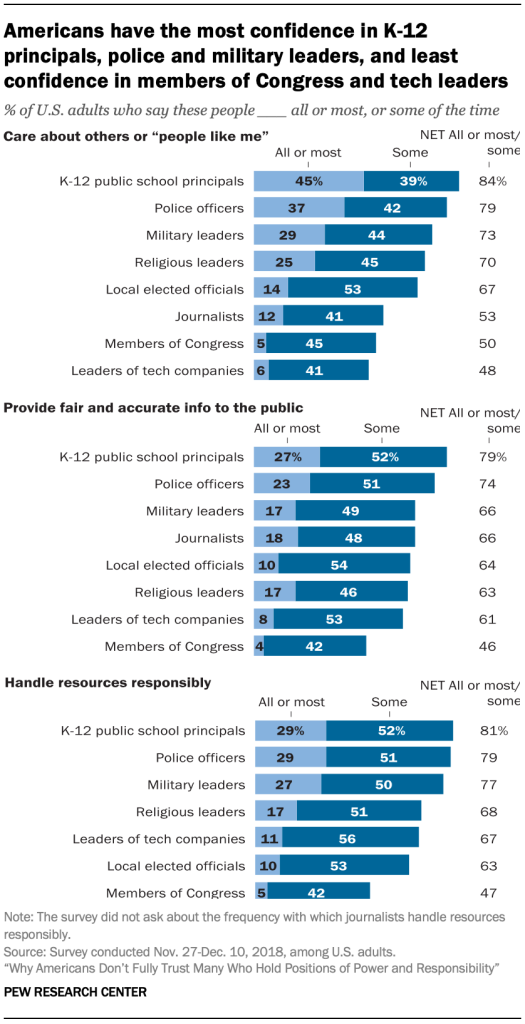 Despite Americans' high level of trust in school leaders, they said principals, like many of their counterparts in power, often acted unethically. But principals still stack up better on ethics than most the other professions that were included.

And when it comes to owning up to mistakes, more Americans think principals acknowledge their missteps. Only 32 percent of those surveyed said that they thought principals did not often admit mistakes or own up to them. (Compared to 79 percent for members of Congress and 55 percent for tech company leaders.)

For the most part, Americans think those in positions of power carry out the major tenets of their jobs responsibly, though that was one of the areas in which principals did not lead the pack.

Only 72 percent of Americans think principals did a good job ensuring that students developed critical thinking skills most of the time or some of the time.  Military, tech, and police leaders led in the answers to that question.

The report was based on responses from the Pew Research Center's American Trends Panel, a nationally representative sample of American adults. The data were collected between Nov. 27 and Dec. 10 2018, from a sample of 10,618 responses. The margin of error is 1.5 percentage points.