« Arts Education in Schools and Museums: What's Out There? | Main | Arts and Special Education: Reflections on a Photo »

It's right there on the map: The lay of the land in assessment is much more fragmented than it was even a year ago, when all but five states planned to use tests being designed by the PARCC and Smarter Balanced consortia.

Education Week analyzed the 2014-15 testing plans of all 50 states and the District of Columbia and found that only 27 of them still plan to use those assessments. 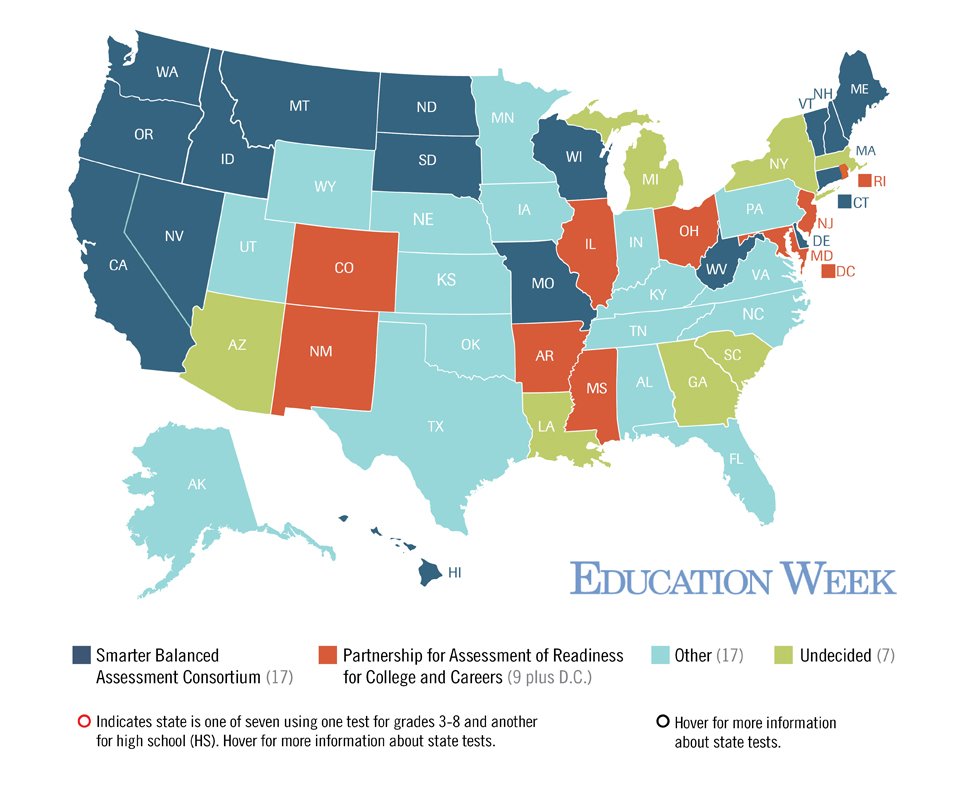 Our new, interactive map of states' testing plans shows what assessments states are planning to use next spring. For states that have chosen tests other than those being developed by PARCC or Smarter Balanced, you can hover over the circle icon and see what they've chosen. For a fuller description of what we found, see our Education Week story, which also has the map).

We'll keep this map updated for you, so be sure to bookmark it for quick reference.

To be fair, we have received our share of flack for casting the assessment landscape as "fragmented." Exchanges on Twitter this morning have pointed out that the landscape was far more fragmented before the era of the consortia, when each state had its own test, and states had wildly varying definitions of "proficient."

It's certainly true that having more than two dozen states share just a couple of tests represents more unification on the assessment front than we've ever seen in this country (for better or worse, depending on your point of view).

But it's also true that as recently as one year ago, 45 states and the District of Columbia were heading straight for a brand new world: a world featuring only two sets of assessments that share a common idea of what it means to be proficient in English/language arts and math. Now that number has dwindled to 27, and the number of tests has risen to 19 or more.

That's a change worth documenting. For better or worse.