Since Michael Brown, Police Shot and Killed 53 Teenagers. Who Were They?

A year ago today, 18-year-old Michael Brown was shot to death by a white police officer in Ferguson, Mo., spurring months of civil unrest and painful debates about race and justice in America.

In that time, 53 other teenagers have also been shot to death by police, according to data I analyzed from two crowdsourced police watchdog projects, Fatal Encounters and KilledByPolice.net, and checked against updated news reports. 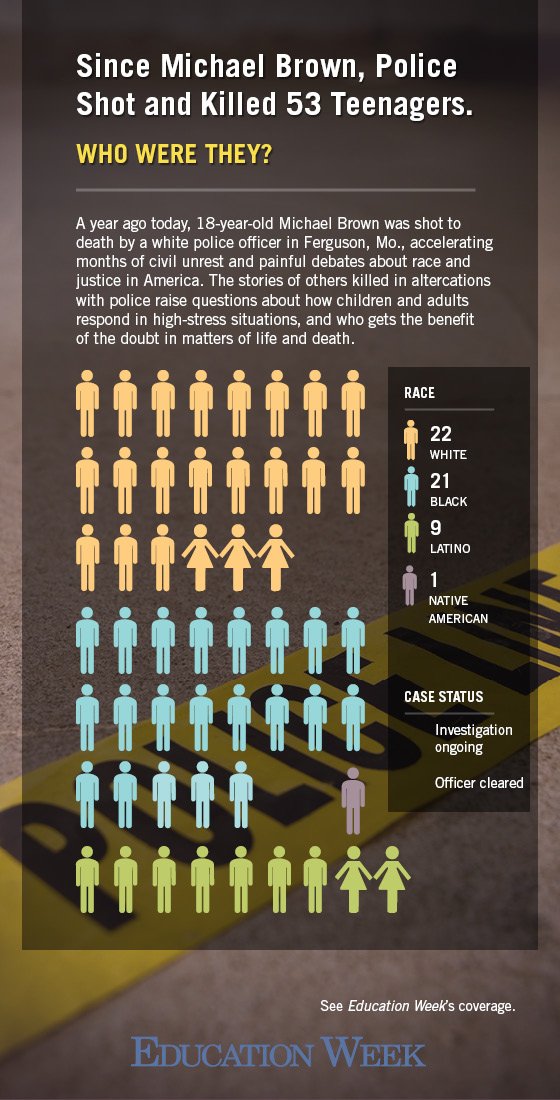 There are numbers and there are narratives in these data, and both should be troubling to educators concerned about young people. Some of those killed were engaged in serious criminal activity. Some were mentally ill. Some were guilty of mischief—shoplifting, trespassing—that under normal circumstances they would get in trouble for but live to look back on. Looking at all their stories together raises questions about how children and adults respond in high-stress situations, and who gets the benefit of the doubt in matters of life and death.

Police shootings of teenagers occurred nationwide, with several states seeing more than one in the past 12 months:

Slightly more white than black teenagers were shot to death by police.

Among the white teenagers shot by police, nine were reported actively shooting at or attacking the officers or bystanders. Five others allegedly brandished a gun or knife. Five of the black teenagers and one Latino boy also allegedly shot at officers or others on the scene. In nearly two dozen other cases police reported shooting because the teenager had or reached for a gun or a knife, which was found at the scene (though two of these turned out to be fake.)

Other shootings involved tense and escalating encounters: scuffles, raids, and instances in which police thought they saw a weapon when the person was actually unarmed. For example, police responding to a call about trespassing in a home saw a boy through an open window. One of the officers allegedly saw him extend a hand, thought he was holding a gun, and shot him. No gun was found.

More than a dozen of those shot by police had mental health issues and were suggested to be suicidal at the time of their deaths. For example, one 19-year-old girl reportedly called police to threaten she was about to kill her family with an Uzi, then stepped out to meet police brandishing what turned out to be a power drill. A few reportedly asked police to shoot them during the encounters.

A note on numbers: To develop this map, I pulled all the data on people killed by police from August 9, 2014 until today. I eliminated those over 19, and the handful of teenagers and children killed by being struck by a police vehicle. There are no central official databases listing individual deaths in which law enforcement was involved, and some of the shootings are as recent as the last few days. The crowdsourced data, reported from media outlets, likely underestimate the full number of deaths.

Perception of Threat Can Be Deadly

It's worth noting that while many investigations are ongoing, in completed cases, police so far have been judged to have acted properly in most of these shootings.

Yet several cases—including high-profile shootings like those of two black boys, Tamir Rice, 12, and Cameron Tillman, 14—involved police making fast threat assessments that turned out to be overblown. Tamir was holding a friend's toy gun in a playground. Cameron and a group of friends were playing in an abandoned house. Both were shot repeatedly when arriving police took them as older and more threatening than they were. Other deaths involved teenagers running or gesturing quickly, and an officer thinking they were preparing to draw a weapon.

In a recent series of studies, adults who were shown pictures of children of different races labeled black children as several years older then they actually were. They were considered "less innocent than their white same-age peers," found researchers led by Phillip Goff and Matthew Jackson of the University of California, Los Angeles. In a stressful situation, be it an officer confronting a potential robbery suspect on the street or a new teacher trying to quiet a noisy class, unintended biases can turn a neutral action into a threatening one, can escalate tensions on all sides.

A teenager isn't likely to die from a misunderstanding with an authority figure at school, but it can lead to a suspension or expulsion, or simply disengagement from learning that can kill a student's academic career. Beginning in mid-September, Education Week will dig into how implicit biases manifest themselves, how they shape students' experiences in school, and how educators can counter them.

This year, the Trinity United Church of Christ in Chicago released a video in response to the shootings, providing "survival tips" for young people encountering the police. While it's troubling to think that our children need this sort of training, it also seems worth sharing:

For more on the legacy of Michael Brown's death in Ferguson, Mo., see Denisa Superville's coverage at District Dossier.