From echoing hallways and droning air conditioners to loud lectures and whispered secrets, schools can be noisy places. But a new study suggests high background noise can significantly distract some students during testing time.

Prior research suggests even moderate background noise above 65 decibels—about the level of a noisy classroom—can be distracting and cause problems if it is consistent over time. (To hear examples of common school noises, click on the "play" arrows in the chart below.) 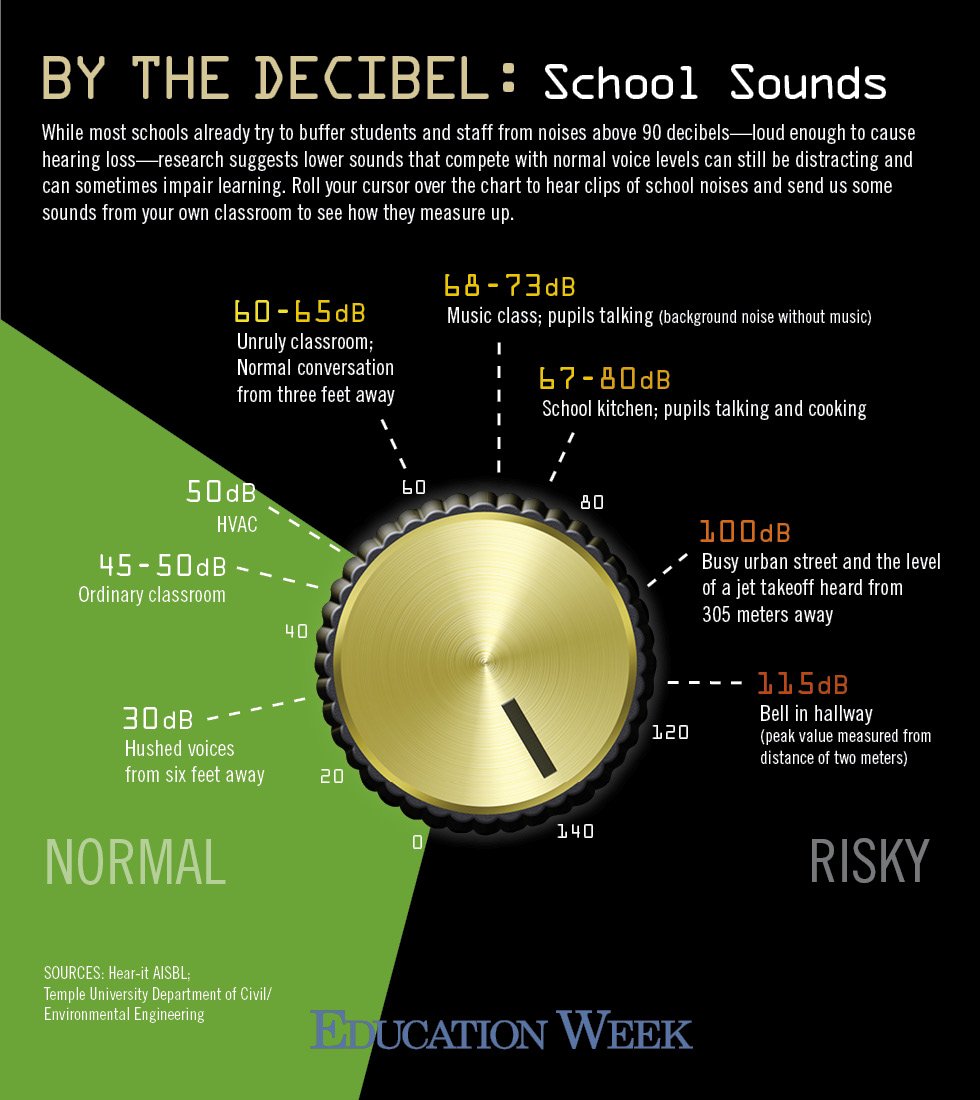 Urban schools often face higher background noise—with bigger class sizes, older concrete buildings that magnify sound, and sites closer to heavily traveled roads—than suburban or rural schools. In more than 250 sound tests over two days, the researchers found the average noise level in the schools was 63.7 decibels and hit highs of 85 decibels, from hallway talking, door slamming, or even yelling in the classroom. None of the sound checks registered at or below 35 decibels, the recommended limit for classes.

About 40 percent of the students reported that the noise level bothered them while taking a standardized math test. While two-thirds of all students said they were able to ignore the noise, one-third reported feeling angry, frustrated, or "zoning out."

The researchers found that the more students reported being bothered by the sound, the lower their math scores. In fact, differences in reaction to the noise level accounted for 10 percent of the difference in students' scores on the math test. For context, that was the same magnitude of performance gap explained by the differences in students' prior grade point averages. The study found no difference in that effect for older or younger students.

"The amount of noise students in urban schools may be subjected to is astonishing," the researchers concluded. "The lowest noise level recorded in this study is 55 [decibels] with the average almost doubling the recommended level, which happens to be very close to the critical 70 [decibels] recommended by some researchers as unfavorable for young learners. To exacerbate the situation, many students in this study have already lagged behind considerably in school work."

The results echo prior research, such as a 2013 study in the Journal of Urban Health, which found an increase in background noise of 10 decibels was associated with a drop of 5.5 points on average for  8- and 9-year-old students taking standardized tests in mathematics and French language, after controlling for their socioeconomic backgrounds.

While school building standards have restricted building noises in the last decade, "this study reveals most noise actually comes from inside the school, such as door slamming or yelling." The researchers recommended school administrators consider teaching students about noise pollution and reduction strategies, and using isolation headphones for students during testing.