A Map of States' 2015 Testing Plans: The Dust Has Finally Settled

We've finally got a complete answer to the question: What tests are states administering this spring?

Last May, EdWeek asked all states and the District of Columbia to provide details of their testing plans for 2014-15. You might recall that we saw a good deal of fragmentation and uncertainty then. Seventeen states reported plans to use Smarter Balanced, nine states and D.C. said they would be giving PARCC, and 17 had made plans to use tests built by other vendors. Seven hadn't decided yet what they were doing.

My colleague Andrew Ujifusa and I have been updating states' plans periodically since then, and we've now got a complete picture of who's doing what for 2014-15 testing. Here's how our map looks now: 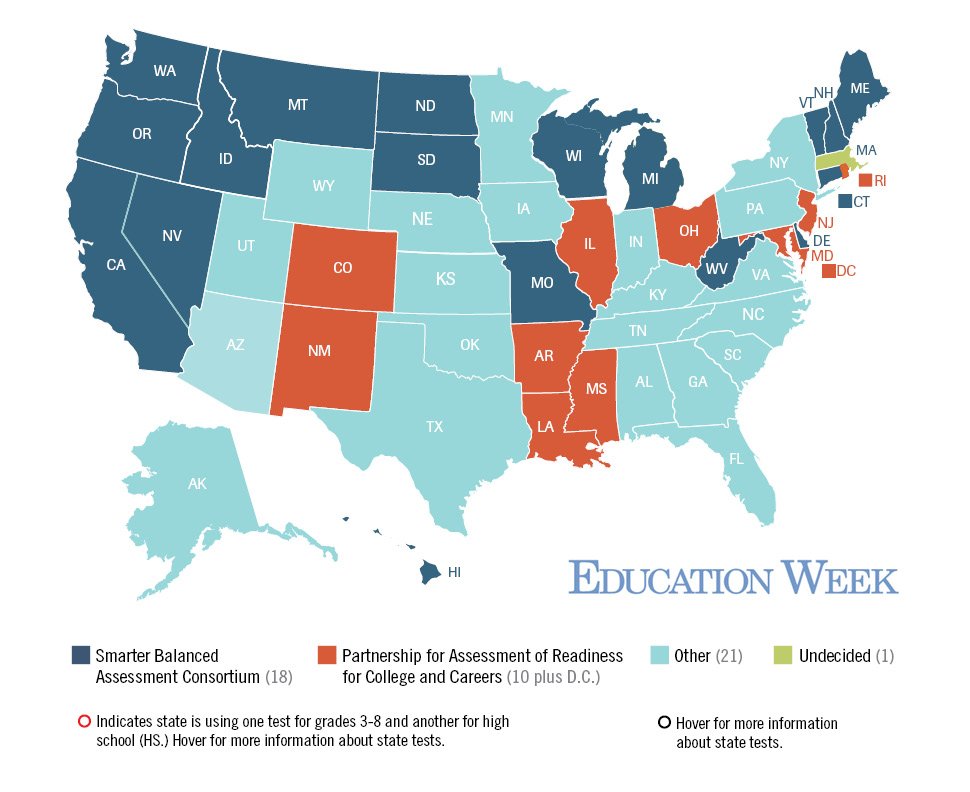 South Carolina and Louisiana were two of the "undecided" states to take the longest to figure out what they were doing. You can see from our map that South Carolina has decided to use ACT/Aspire in grades 3-8 and the ACT college-entrance exam in grade 11 this year. It will issue a request-for-proposals for a test for 2015-16.

Louisiana, as you know, has been embroiled in more than a little controversy—and a few lawsuits—over its plan to use PARCC. For that reason, we waited a long time to change its status on this map. But our information suggests that it's highly unlikely now that any legal action could derail the state's plans to administer PARCC this spring. So here we've added it to the PARCC group.

Massachusetts, then, remains our only "undecided" state on the map. And that's not because the Bay State can't figure out what its testing plans are. It's because it's the only state that's offering districts a choice of which test to give this year. Massachusetts districts can administer PARCC or the state's current test, the MCAS. The state will then decide which test to require statewide in 2015-16.

With that, we give you our final map for 2014-15. This is what testing looks like in the U.S., after all the hubbub about the common-core standards—or whatever standards states ultimately embraced—and what assessments states will use to gauge mastery of them. Of course we still have the moving target of Congress' ESEA reauthorization, and what that might deliver on the testing front. Our crack Politics K12 team will keep us updated about that.

In the meantime, here's EdWeek's guide to assessment in the very-eventful year of 2014-15.