How Can Districts Find Evidence-Based Programs Under ESSA? Ask Cleveland

The district is in the process of reviewing every program and intervention to establish what it does, how much research backs it, and how well it works within district schools.

"There is a real value of information and data here and a real hunger for it," said Matthew Linick, the district's executive director for research and evaluation. "One of the first conversations I had with members of leadership was, we don't just want to know what's working, but what is working for us."

Cleveland is ahead of the curve with regard to the Every Student Succeeds Act's new evidence requirements and its newly released guidance on how to apply research to school improvement, which we wrote about last week. Linick said he found the new approach "reaffirming the direction we are already going," but added, "We've really taken the opportunity to think about how this is going to affect us for the next 15 years."

Like a growing number of districts nationwide, Cleveland gives its principals significant autonomy to plan their own budgets and school improvement, and that means Linick and the district's other research staff "can't just do the evaluations, then walk into the CEO's office and inform him on what to buy."

Instead, the district is creating a web-based directory of academic resources available to principals, based on both external research and internal evaluation of the programs. You can see an example of one of the program evaluations below: 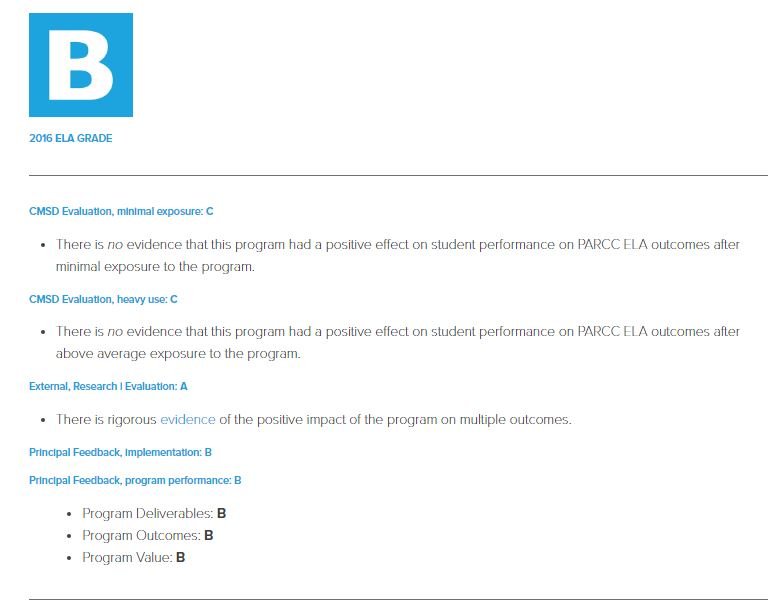 "We're evaluating programs regardless of their external body of evidence, because context matters," Linick said. "As a researcher, you know the more rigorous the study is, the less generalizable it becomes. While things that work in urban districts could be helpful, Cleveland's urban context could be very different. ... Just because something works in Cincinnati doesn't mean it will work in Cleveland."

In addition to evaluating individual programs, Cleveland schools are working with the local Cleveland State University to study its most pressing questions going forward.

For example, a partnership of researchers and school administrators are building a dashboard to allow principals to easily monitor how well initiatives or programs are working in their schools. In the process, the dashboard will help schools easily collect and report data to understand how various factors—changes to the school calendar, differences in grade-spans at different schools, and the percentage of students with an individualized education plan, among others—affect student achievement.

Building the capacity to do research within schools has also helped principals think differently about what programs they implement, Linick told me.

"It really helped them to think, 'if I'm going to hold myself accountable for test scores and I'm implementing a program that doesn't directly relate to test scores, am I setting this program up to fail before it starts?,' " he said. "It requires thinking pretty long term: If you are investing in pre-K to improve graduation rates, it's going to be the person that comes after the next person who sees that bump."